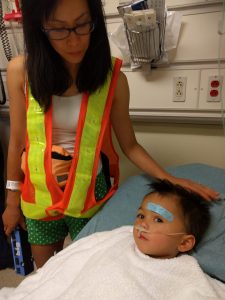 Juan and I both had on our light up vests coincidentally.

Yesterday, I had to take Wilshire to the emergency room for stitches. The kid tripped and hit his eyebrow on a door at his daycare while racing to get to the potty. (We’d trained him the weekend before, so he was still a novice.) Wilshire’s battle scar was a superficial cut about a half-inch long right over his eyebrow that necessitated four stitches.

As many readers know, we only own one car. This means that we have all sorts of unwritten contingency plans on how we’d cope when we need to get somewhere quickly without a car. The situation gets thornier when there is a sick child, an unplanned doctor’s visit, and the parent who has to retrieve the child “green commuted” to work. It has been much easier to remain a one-car family in our area thanks to Lyft, Uber, bikeshare, and (most recently) dockless scooter-share. But as I’d covered in a prior blog post, those three options do not work when you have to transport another human or a lot of stuff.

In this particular situation, I wound up deciding to use my bicycle to transport my son to the ER. Here’s why:

It beat driving – and paying for car parking.

Parking at Will’s doctor’s office, which is across the street from the ER, is $20 an hour. I wasn’t sure how the parking worked at the ER itself, and wasn’t about to figure it out. (Too complicated, complete with this diagram). And because I was initially my own for an indeterminate amount of time, I ruled out street parking because I didn’t want to risk getting ticketed.

Note that I have gone to the ER before by car. It was late at night, long after the buses stopped running and you had to pay for street parking.

I could get there confidently on a bike

I was able to travel on bike lanes the entire way from daycare to the hospital. This trip was very different from the one I wrote about this spring, where I opted to drive to a park because I did not feel safe riding my bike on Cloverfield Blvd., since it required sharing the road with motorists merging to get into a freeway (“Driving Mr. Wilshire”)

UCLA put in respectable wave bike racks just right of the entrance to the ER. They weren’t dinky wheel-benders like the ones at 2001 Santa Monica Blvd., another medical building in my area I frequent sometimes. 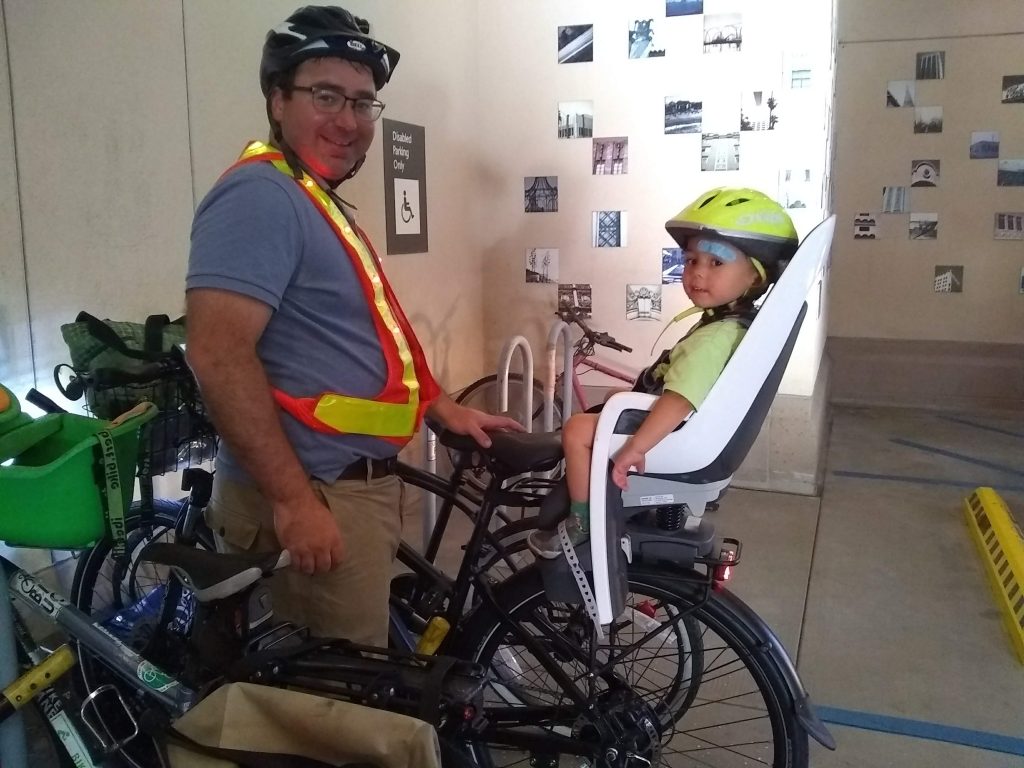 Getting ready to depart from the ER on the bike. Note that mom and dad both had their lightup reflective vests on.

It is also helpful to note that Juan had ridden his own bicycle to work. This meant that he could meet up with us very quickly at the ER and that we could go home together.

We are fortunate to live under two miles from the hospital. I was able to travel on bike lanes the entire way to the hospital. And one of us could have easily gone home to retrieve a car if necessary to bring Will home. But as it turned out, the hospital would not discharge us before the sedation wore off and Will could sit and stand on his own. This also meant we couldn’t have left anyway before Will was ready to sit in a bike seat. 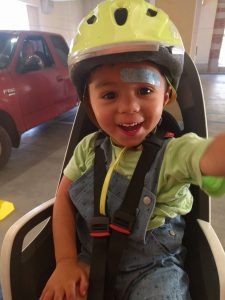 Would we do this again?

The safe answer is, it depends. Obviously, if warranted, I would call 9-1-1 for an ambulance. But my son wasn’t in pain. He hadn’t broken any bones or been through a car crash. He wasn’t suffering from the flu, a high fever, or a condition which would’ve caused him to vomit. Will had a small cut on his eyebrow that was covered through a mini-butterfly bandaid, and he was in good spirits up until he realized he was going to the hospital. And if we’d driven, I actually think it would’ve taken us longer to get to the ER.

I share this to offer reassurance to families, particularly those who are contemplating shedding a car or those who are wondering what they would do if they wanted to remain car-free. The reality is, you will make it work. Parents can be incredibly creative when they have to be. They will move mountains.

Good luck! And until next time,
Sirinya