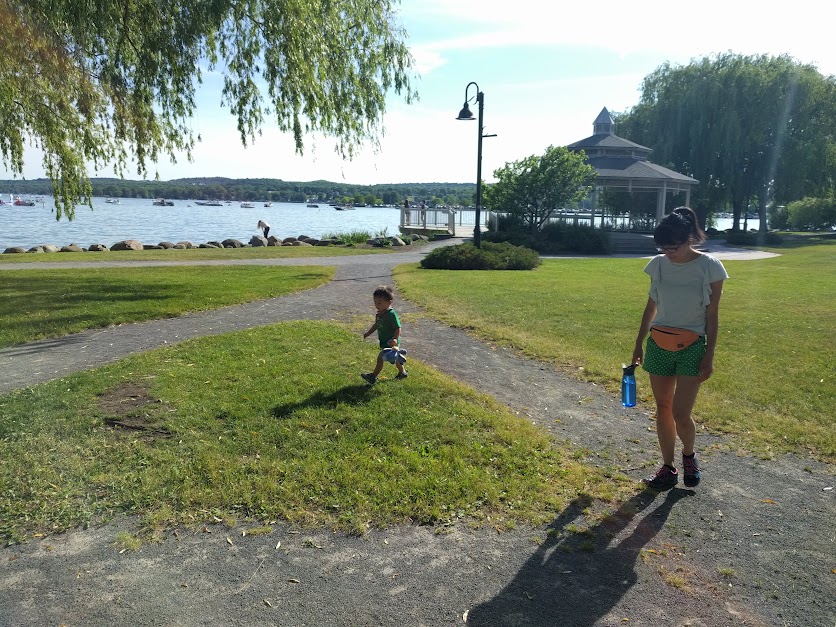 After spending two days in Toronto, we took a MegaBus across the border Buffalo, NY, and spent the weekend in Western and Central New York. Along the way, we crossed more things off our bucket list. 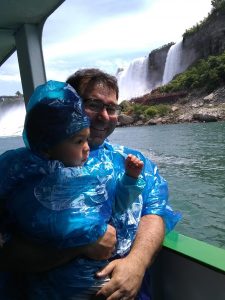 Niagara Falls was a short drive from the Holiday Inn we stayed in Cheektowaga, just next to Buffalo airport. We boarded the Maid of the Mist to get close up to the Falls. The line was quite long – probably nearly an hour. They give you these blue ponchos to wear because you will get drenched. The boat gets That Close to the falls. Afterward, we walked across the bridge to re-enter Canada.

The Canadian side of the Falls is thriving. Anyone who’s interested in urban planning and economic development should check it out because words can’t capture the difference.

After we finished visiting Niagara Falls, we drove east to meet up with old friends of mine from working at summer camp in LA. We visited my friend Jess and met her kids in suburban Rochester, and spent the night with my friends Bill and Kathy just outside Syracuse. We loved spending time with them and their families, and learning more about their communities. It’s been a long time since we were all together being young in LA. Our days back then comprised of talking about our campers and camp gossip. When we got together 15 years later, we talked about: pensions, taxes, schools (and school choice), making friends with other parents, and how it gets easier when your kids are old enough to join activities (but still hard work), careers and trying to maintain dual career households.

A little bit more about taxes here for readers who are interested in urban planning and municipal / local government. Property values in western and central NY, where we visited, are generally lower – but taxes are much higher than they are in California. Of note, some municipalities have higher tax rates to compensate for lower property values.

This is especially pronounced in the City of Syracuse, which has been contemplating its dissolution and absorption by the greater County of Onondaga for quite some time. Syracuse residents would’ve still be on the hook for covering onerous pension obligations, in addition to supporting their own school district. Per a Governing Magazine article (link):

No longer a city in its historic sense, Syracuse would become a “debt district.” Yes, those are the words the commission report uses. Residents of the evaporating metropolis would continue to be responsible for the crippling public pension debts that have threatened its solvency for years. There would still be a Syracuse school system, and this too would have to be paid for by those living inside the urban boundary. The county would not be asked to bail out school or pension debts.

Conversely, there are also communities which tax themselves heavily to support high-quality schools. Case in point: Pittsford, NY, a suburb just south of Rochester that home to many professionals. A house there listed for the median price of a house in LA – roughly $650,000 – will set you back $24,000  per year in taxes, of which $16,000 goes to the school district. Almost seems quaint given the way Proposition 13 has essentially starved our schools and municipalities of resources, right?

On a brighter note, Bill and Kathy took us to the Rosamond Gifford Zoo in Syracuse, which was terrific. Wilshire particularly enjoyed seeing the patitos (ducks) and this llama. 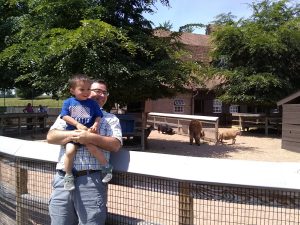 The following day, Bill took us and his kids to pick strawberries at Abbott Farms in Baldwinsville, which is about six miles from their house. There’s a small window for strawberry picking in central NY – just two weeks – our timing was perfect. Abbott Farms is a fully operational farm that also offers amenities like u-picks (based on time of year) plus a beer tasting room! 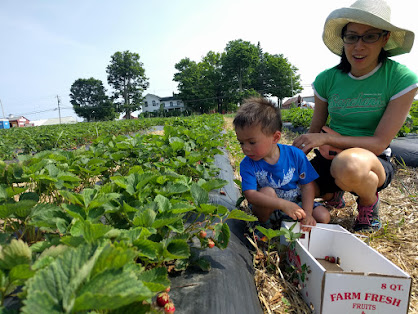 Wilshire went strawberry picking. It was brutally hot – so it was humbling for me to appreciate how much work it takes just to pick one small basketfull of strawberries.

From Liverpool, we traveled to visit the Berkshires and to Strasburg, PA, which is such a place for train fans that it puts the Scottsdale train park to shame. (Sorry). More for another post.

P.S. If you take a MegaBus across the border, they will make you disembark the bus for a secondary screening. We saved a lot of money, but it was a colossal pain.

Wilshire Thanks You for Vaccinating Your Child